Instructions on how to replace the fuse inside the GDT-292A. These instructions will also work for the other versions of the meter: GDT-293A, 294A, & 295A. This is an older multimeter that we no longer manufacture, but we would still like to make people aware of how to replace the fuses safely without altering the multimeter in a way that could make using it dangerous. Luckily for us the customer was able to supply these pictures for others who may need help in the future.

To replace the fuse(s) open the case as previously mentioned in the manual, and remove the Printed Circuit Board (PCB) from the front cover by ONLY removing the four larger screws that are located toward the top of the meter and that are spaced to form a rectangle. The PCB and cover will now be able to separate easily. 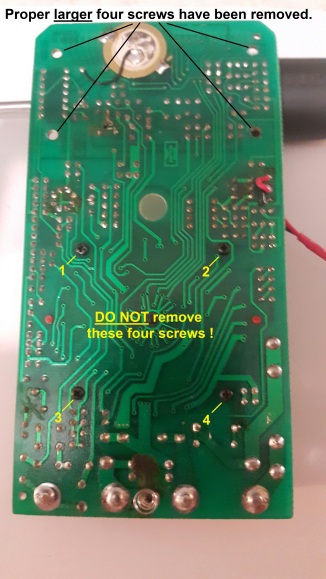 DO NOT LOOSEN OR REMOVE THE FOUR SMALLER SCREWS THAT ARE LOCATED TOWARD THE MIDDLE/BOTTOM OF THE METER AND ARE SPACED 4 CM (approximately 1 1/2 inches) APART AND FORM A SQUARE.

(These four smaller screws marked in yellow in the above image hold the rotary switch in place.) DO NOT REMOVE THEM!

For protection against fire or injury the fuse(s) should be removed without causing damage to nearby components and should only be replaced with fuse(s) of the same specified voltage and current ratings as specified in this Operator’s Manual.

Refer to the two photos above. One black and three red rubber insulators surround the four jacks that the leads can plug into. The insulators are held in place against the PCB by the front cover. Upon dis-assembly one or more of the colored insulators may get stuck in the cover (in this dis-assembly one red and one black insulator were stuck to the cover). For ease of re-assembly, the stuck insulators can easily be pressed out of the cover and put into place on the PCB (wide end toward the PCB) as the two red ones in these photos are. Just remember, the BLACK rubber insulator goes on the post of the PCB labeled “COM” (of course). These insulators ensure a snug fit of the leads without using split-tip leads that lose their tension over time.